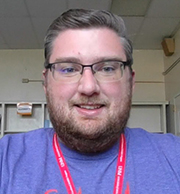 The senseless death of George Floyd in May of 2020 crystalized what many already knew: that racial inequity is one of the largest issues in the modern world. After Floyd’s death, racial justice became the cultural zeitgeist. Hit shows like Brooklyn 99 wrote entire seasons where the characters reckon with the idea that they may be a part of the problem. ASCA-aligned school counselors, however, have understood the need for racial justice in schools for much longer than the past year and a half. The American School Counselor Association was founded to unite the school counseling profession in integration efforts to ensure all students have access to high quality, comprehensive, professional school counseling programs. As ASCA-aligned school counselors, we understand that racial injustice is the norm in our schools and we believe that we must actively work to undo racism’s impact in our schools.

To understand that racial justice can and should start at schools, we must first understand how schools have created racial injustice. Racial injustice is rampant in many areas; one example is in traditional school discipline policies, which focus on blame and exclusion. This results in kids being sent out of a classroom by a teacher, or suspended by a school administrator. This leads to less time learning in the classroom, which causes the child to fall behind and fail classes, eventually leading to dropping out of school. School psychologist Dr. Kelsie Reed’s research has found that 73 percent of students who were suspended one time failed a class, and one suspension increased the likelihood of dropping out by 20 percent. Dropping out of school nearly triples the likelihood of a child being involved with the juvenile detention system. As you may have guessed, students of color are significantly more likely to be suspended. The ACLU and U.S. Department of Education statistics showed that Black students are three times more likely to be suspended than their white peers and 70 percent of students referred to school police are Black or Latino. School discipline policies have traditionally pushed kids of color out of the classroom and into the criminal justice system.

Now that we understand how traditional discipline policies have perpetuated racial injustice, we can begin to unpack how schools can strive toward racial justice. One of the first changes that needs to be made in schools is discipline policies. We need to move away from policies of exclusion and punishment and toward inclusion and learning. One way of doing this is by implementing restorative practices. Restorative practices focus on bringing students who do harm into the school to learn how their behavior affected others and how they can repair the harm. It is also preventative and works to create a positive school climate where both staff and students communicate and empathize with each other. NMSCA is working to create a school counselor toolkit on this topic and will have resources so you can begin to use restorative practices in your school and advocate for fuller implementation with your administration. 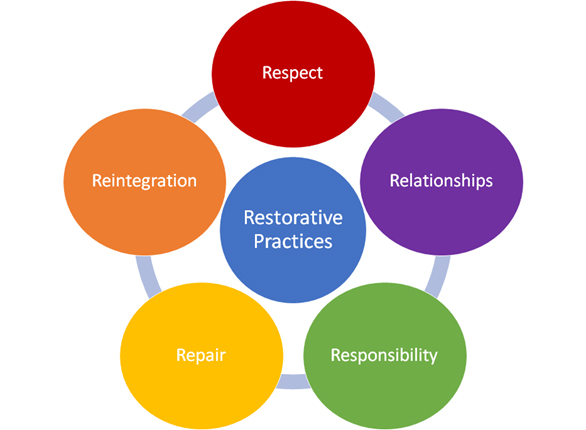 Above: The core values of restorative practices, from "Demystifying Restorative Practices and SEL" presentation by Jeff Newcomer Miller and Adrianna Kerr at Albuquerque Public Schools.

Beyond restorative practices, school counselors can use our role to advocate for changes within our school. We can try to educate our administrators on the fact that suspensions are ineffective at changing behavior and have an extremely deleterious effect on the school as a whole. We can educate families and students on their rights and on resources to ensure they receive equal educational opportunities. We can educate teachers on how their traditional classroom management policies may have a racialized impact. School counselors have a unique position in schools that allows us to advocate for our students and families in all aspects of the school setting.

Racial justice has become a common topic of conversation for many people, and ASCA has continued and been consistent in their belief that schools and school counselors must be a force for racial justice. Our ethical standards compel us to advocate for equity in schools for all students. As ASCA-aligned, comprehensive school counselors, we understand that we need to be advocates in our schools, identifying racist policies and working to undo their impacts in our school community. It is a large job, but if anyone can take it on, it’s school counselors.

Below: From the presentation “Restorative Practices in Albuquerque Public Schools” by Layla Dehaiman and Jeff Newcomer Miller. 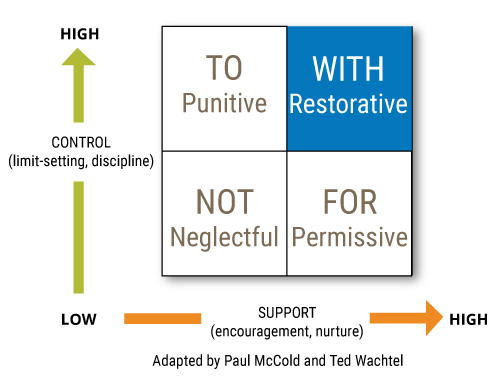 Zac Craig is a middle school counselor in Albuquerque working to integrate restorative practices as a way to address systemic inequities and build sustaining relationships. He can be reached at secretary@nmschoolcounselor.org.